A long time ago, I made a blogpost about a solution for Drupal and a MASTER-MASTER replication setup: http://www.jochenhebbrecht.be/site/2011-01-13/drupal/drupal-master-mast…. At that moment of writing, I was very happy with that solution. But after some months of experience, I must say, I cannot agree any longer with my own solution. Some people were commenting that blogpost, and I really wanted to post my point of view of a new possible architecture. I definitely don't want to spread around a bad architecture setup. The new environment holds some improvements (which I cover at the bottom of this blogpost). To be honest, I must say that I only implemented the memcache improvement of the new architecture. There was no time/budget in my previous company for the other improvements, but I strongly believe those extra improvements are the way to handle a MASTER-MASTER replication setup.

Why is the old architecture so bad?

In the matter of fact, we were having too much issues with the old architecture. We were losing time and the architecture was just unstable. I'll explain why: 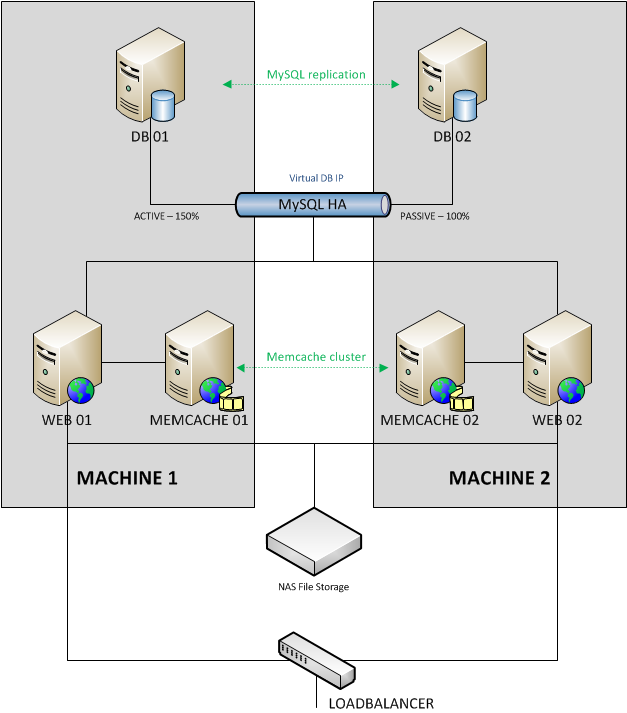 So, after all these problems, we came up (also thanks to the hosting provider of my previous company) to this new setup which seems to me a better solution:

MHA performs automating master failover and slave promotion with minimal downtime, usually within 10-30 seconds. MHA prevents replication consistency problems and saves on expenses of having to acquire additional servers. All this with zero performance degradation, no complexity (easy-to-install) and requiring no change to existing deployments. MHA also provides scheduled online master switching, safely changing the currently running master to a new master, within mere seconds (0.5-2 seconds) of downtime (blocking writes only). MHA provides the following functionality, and can be useful in many deployments in which high availability, data integrity and near non-stop master maintenance are required.

So how does it work?

A last improvement would be to store all data on a NAS file storage.

So, happy to have written this down :-). It took me a while! I hope you enjoyed reading this blogpost. Let me know what you think about this new architecture.

how do we configure in the drupal settings file, if we have 2 databases.

For Drupal, there will be only 1 database. Drupal will connect to the virtual DB ip. But in the backend, several databases are used. But Drupal is not aware of that, it will only see 1 database.
So configure your Drupal settings.php like you're used to configure it :-)

Great Thanks for your quick reply!
I have database1 & database2 (master & master) which mapped with an loadbalancer server, so I tried to give that loadbalancer IP address on drupal settings db_url but it was not taken because it would expect mysql username and password.

So as per your suggestion I have to configure an mysql proxy server? that would have the IP and username and password which we can use it for settings.php file db_url config?

In the blogpost above, I suggest to use MySQL HA for loadbalancing: http://dev.mysql.com/doc/mysql-ha-scalability/en/index.html.
What kind of software package do you use to loadbalance the MySQL databases 1 and 2?

We are using 'piranha' for loadbalancer.
If I change the loadbalancer to MySQL HA is this will have same as username and password mysql servers, so that I can use that credentials in drupal settings.php file for db_url?
Thanks

MySQL HA is a "concept", not an implementation/solution. There are many solutions such as MySQL Replication, DRBD, Oracle VM Template, MySQL Cluster, ...
And indeed, you just use the username/password of the actual database, as the MySQL HA solution is just a virtual layer in front of the real database.

Btw, another solution which I didn't mention is "keepalived". More details on this can be found on this blogpost: http://alexzeng.wordpress.com/2012/10/31/how-to-setup-mysql-ha-by-using…

Hi Jochus, continuing on Jagadees's Comment, I am running a master-master MySQL with LVS (HA) as in i have 3 machines : 2 Real Mysql Servers (Running in master-master mode), One Real HA server on which both MySQL servers are load balanced via a VIRTUAL IP Address.
My problem is when i try and connect to the MySQL database via a simple php script on the Drupal webserver i get a positive response, but when i add the virtual server's IP address with the db name /user/pass details of the mysql server in settings.php it does not work. How do i overcome this? does drupal support Master-Master MySQL @ all? If yes, then i my case how do i achieve that?

What do you mean with: "it does not work"? Can you provide me some details on the error you're receiving?
Can you post me your settings.php $db configuration? (yes, replace URL, username and password please :-))

Apologies for posting twice, experiencing some issues with my browser.

Here are some more details :

When i use the Virtual IP 4.4.4.4 with the same user and pass as used in the above case, the website fails, and i get no error messages, i get the white screen of death, no errors on apache or mysql end too?

Which version of Drupal are you running? 6? 7? 8?
You should get some errors if you receive a white screen. Check your Apache HTTPD error.log or the "Recent log entries" in Drupal

Jochus,
Running Drupal version 7.21 to be precise.
Get no errors on HTTPD error.log :(
Not sure where do i check the "Recent log entries" can you help me with that?

Check this page for more details on error reporting: http://drupal.org/node/158043.
If this doesn't work for you, try to add ZendDebugger to your PHP environment. And then using Eclipse, you can step through your code using a debugger. In this way you will see the actual exception.

ps: I only have experience with D6. I left the Drupal world and I'm currently working on Java projects.

Many thanks, as far as i know, ERROR_Reporting is ON, however will try to look into this and get back to you.